What your favourite ice cream says about you….

A study done by Dr. Alan Hirsch, a Neurologist and Psychiatrist who specializes in the treatment of smell and taste loss, has found a link between personality traits and food preference. Hirsch uses various standardized psychiatric test results to make statistical correlations, explaining that the same part of the brain (the limbic lobe) is responsible for both personality traits and food preference. Interestingly, Hirsch says the taste for your favorite ice cream is set during childhood and tends to remain consistent throughout your life.n a study by Hirsch for Baskin Robbins, 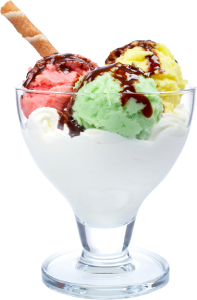 Vanilla is one of the simplest of ice cream flavors, but those who like it are actually likely to be colorful, impulsive, idealistic risk-takers who “rely more on intuition than logic,” according to studies conducted by neurologist Dr. Alan Hirsch, founder of the Smell and Taste Treatment and Research Foundation. Vanilla lovers were also emotionally expressive and successful in close relationships.

Strawberry lovers were often tolerant, devoted, and introverted; in research conducted for Dreyer’s/Edy’s, he found fans of the berry flavor were also logical and thoughtful. If you prefer a chocolate scoop, Hirsch determined you are likely to be flirtatious and seductive, and also lively, charming, dramatic, and gullible.

If you prefer a chocolate flavor, Hirsch determined you are likely to be flirtatious and seductive, and also lively , charming ,dramatic and gullible.

There’s a good chance mint chocolate chip is your favorite flavor, according to Hirsch’s study for Dreyer’s/Edy’s, which found this ice cream signified ambition, confidence, frugalness, and argumentativeness. “[They] aren’t fully satisfied until they find the tarnish on the silver lining,” said Hirsch about its fans. However, Hirsch predicts that mint chocolate chip lovers are compatible with one another.

This flavor’s bright colors and fruity taste is no match for the downbeat attitude of those who choose it as their favorite. “We found that people who prefer rainbow sherbet are more pessimistic than you would think,” says Hirsch, who also found they’re analytic and decisive.

If this flavor-packed cone is your favorite, you’re most likely aggressive and engaging, but a good listener, according to Hirsch’s Baskin Robbins study. The Dreyer’s/Edy’s panel also determined that the goal-oriented Rocky Road lover is often successful, but sometimes aggressive behavior can “inadvertently hurt the feelings of those that surround him.”

In Killarney we are lucky enough to have “one of the best ice cream shops in the world” Murphy’s Ice Cream opened in Dingle in the Kingdom of Kerry in 2000 with a goal of making the worlds best ice cream , still to this day making it the same way only with bigger pots and pans.Breaking eggs and using fresh , natural ,real ingredients,fresh cream, milk from a rare , indigenous breed of Kerry cow and pure cane sugar. Murphy’s ice Cream opened in Killarney in 2005 and opened a shops in Dublin , Galway and Kilkenny. When in Ireland make sure to visit and taste one of the worlds best ice creams.