#9 of Sage Taxi’s list of sights to see on their virtual tour of the Ring of Kerry : Valentia Island 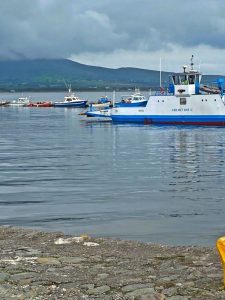 From the moment you step off the ferry or drive into Valentia, (you have two options for getting there) .It is a truly unique experience . There is so much to see here from its mesmerizing scenery , breathtaking views to the lighthouse and Slate Quarry . A visit to Valentia Island is a must.

A tour of Valentia Lighthouse is a must  – one of the Great Irish Lighthouses is open to the public. Built in 1841 as a harbour light for Knightstown and beyond , it sits on the grounds of an older Oliver Cromwell Fort. The light was first exhibited on 1 February 1841 . Since November 1947 the light has been automated.UP to this the lighthouse was staffed by a single keeper, he and his family lived on site, however since the automation the keeper was withdrawn and a part time attendant looked after the station.

A small bridge links the Lighthouse to the rest of the compound. The tower is open as is the Keeper’s house,here you can see many photos and memorabilia showcased within. Opening hours: Easter-September ;Daily 11.00 am to 6.00pm find out more about Valentia lighthouse 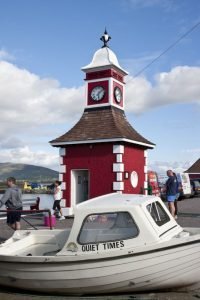 As you enter Knightstown , you will find the picturesque red tower with its infamous Clock. A trademark of the Island , dating back to the late 1800’s , it was first intended to weigh coal arriving at the Port.The scales were in the lower section of the tower, later the clock was ordered by the Knight of Kerry who lived on the Island at Glanleam , to make the building more aesthetically pleasing. 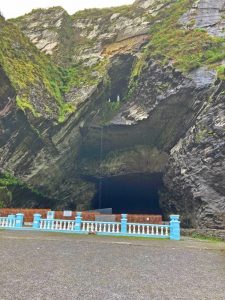 Valentia quarry  first opened in 1816 under the Knight of Kerry. The quarry provided slates for Paris Opera house, London house of Parliament which is undergoing a huge restoration of the slate floors at present,( after 160 years that just shows the quality of the slate ),many  alters and counters. Slates were shipped to as far as South America, for the San Salvador railway and these were also used for various railways in the Uk. It employed over 200-400 men , wages were double of that on the mainland all through the famine years. The quarry closed in 1911 from massive rock falls. It opened in 1998 and again Valentia Island Slate is still being successfully exported around the world along with providing local employment .Annually there is mass in the grotto which has a statue of Our Lady and ST Bernadette.


Sage Taxi’s provides one day tours of Valentia Island , as there is so much to see and do here, Glanleam House and Gardens , the lighthouse, the Tetra pod Footprint track (oldest dated evidence of 4 legged amphibians over land) to name but a few. It is a tour well worth experiencing with its stunning views. book your private tour of Sage Taxi’s Tour of Valentia Island here